Viewers will get a first-person taste of what it’s like to run a Paralympic 100 metres final as a vision impaired sprinter in a new campaign looking ahead to the Tokyo 2020 Paralympic Games. Called ‘Wait for the Greats’, the film is the first campaign created by adam&eveDDB since its appointment by the International Paralympic Committee (IPC) in 2019.

The IPC briefed adam&eveDDB to help continue its mission to showcase how Para sport is transforming the lives of persons with disabilities– work which is given a huge boost every four years when a global cumulative TV audience in excess of four billion people watches the Paralympics.

With Tokyo 2020 now postponed until 2021, the IPC wanted to find another way to continue the momentum and keep the spotlight on Para athletes. The answer was to look forward to the greatness coming next year, but with a twist – showing it from the perspective of David Brown, the fastest fully blind sprinter in the world, running 100 metres in under 11 seconds, and a competitor at the London 2012 and Rio 2016 Paralympics.

For 17 seconds, we experience the world as David did during the men’s 100 metres T11 final in Rio – the sounds of the crowd, in-race commentary from Jerome Avery, David’s guide runner, as well as David’s feelings. The whole time, the screen is almost totally black, to give viewers an idea of the extent of vision impairment experienced by T11 competitors.

The ad breaks on 24 August in the UK and US, where it will run on Paralympic broadcaster Channel 4, NBC and online. adam&eveDDB has also made an audio described version for people with a vision impairment and a subtitled version for those who are deaf or hard of hearing.

The ad features music from the new Netflix film ‘Rising Phoenix’ about the Paralympic Movement which was scored by Daniel Pemberton.

The IPC is making the film available globally to Paralympic broadcasters so it can be aired to audiences to build anticipation for the Games in 2021.

Craig Spence, Chief Brand & Communications Officer at IPC, said: “Faced with unique circumstances and a historic first postponement of the Paralympic Games, we have a Groundhog Day scenario whereby we are once again celebrating one year to go until the Tokyo 2020 Paralympic Games. To mark the occasion, maintain interest in the Games and generate excitement for next year we wanted an impactful global campaign that would appeal to Paralympic Games rights-holders and sport fans around the world.

“We are hugely grateful to adam&eveDDB for their creativity in developing the ‘Wait for the Greats’ campaign, which we will now roll out across multiple channels in more than 180 countries with the support of our National Paralympic Committees around the world.”

Mat Goff, Joint Group CEO at adam&eveDDB, said: Having a brief to do something different with IPC has resulted in a piece of work we’re very proud of, and it also gave us the chance to work with David Brown and Jerome Avery, two incredibly talented athletes and inspiring humans.” 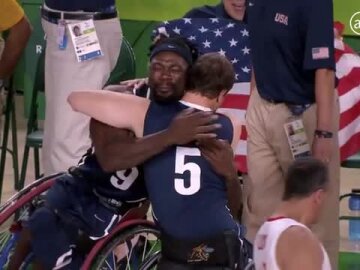 Wait for the Greats

Hey Girls sets out to anger with ‘Seeing Red’ - a psychological study to combat period poverty, created by adam&eveDDB

A psychological study is at the heart of a new campaign by Hey Girls, the social enterprise founded by Celia Hodson to tackle period poverty. The... leer más
AGENCY: ,