This 21st November 2018 marks the 6th anniversary of FF Shanghai. The creative boutique opened its doors in September 2012, sealing the beginning of the international expansion of the independent creative boutiques network, FF. 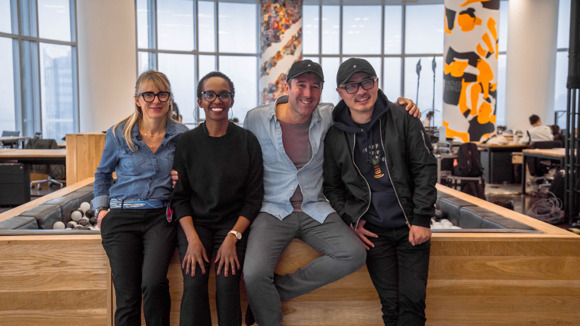 6 years ago, Fred Raillard and Farid Mokart decided to launch FF Shanghai to break into a booming Chinese market with the help of Feng Huang. 6 years later, it is in their new 1500m2 office at the 20th floor of a tower overlooking the electrifying skyline of Pudong that Fred Raillard and Farid Mokart explain “it is always a pleasure for us to go to China to have a better understanding of the future. Indeed, China is five years ahead of its time when it comes to digital".

Ever since, FF Shanghai has grown organically and quickly became one of the most prestigious creative agencies in China. This reputation for prestige allowed the creative boutique to expand its portfolio of clients, working alongside the biggest tech brands in China like Youku, the Chinese Youtube, Tencent, a Chinese web and video game giant or the prominent Alibaba Group but also well-known luxury brands such as Louis Vuitton. Lava Li, General Manager of Creative Design Department at Tencent Interactive Entertainment, said that FF Shanghai “isn’t afraid to explore the unknown and let the craziest ideas come true in order to create the coolest projects for their clients”.

Throughout the years, FF Shanghai has been honored for its outstanding work for a diverse set of brands, winning over 50 awards in international award shows such as D&AD Impact, Clio Awards, Spikes Asia, Cannes Lions, One Show to name a few. In 2014, FF Shanghai has also been ranked among the best agencies worldwide by the very influential US magazine ADWEEK and ultimately won the International Agency of the Year at the Adage A-list in 2016.

This week FF Shanghai announces a strategic partnership with Turner, the American audiovisual group, which is notably the producer of the cartoons Tuzki and Rick and Morty. FF Shanghai becomes the official partner to market Turner licenses in China through the creation of content, new products, and brand partnerships. The creative boutique has also just signed a strategic contract with Ant Financial, Alipay, the world leader in online and mobile payments (more than 900 million users).

As the world stays home to stop the spread of coronavirus, we have seen a temporary decrease in carbon emissions. Meanwhile, government agencies... leer más
AGENCY: ,

On the heels of HP’s “Keep It Human” Back to School campaign, which speaks to the role technology plays in Gen Z’s daily lives and addresses the... leer más
AGENCY: ,
Ver más Noticias