This year is the most successful year I’ve had since becoming independent. 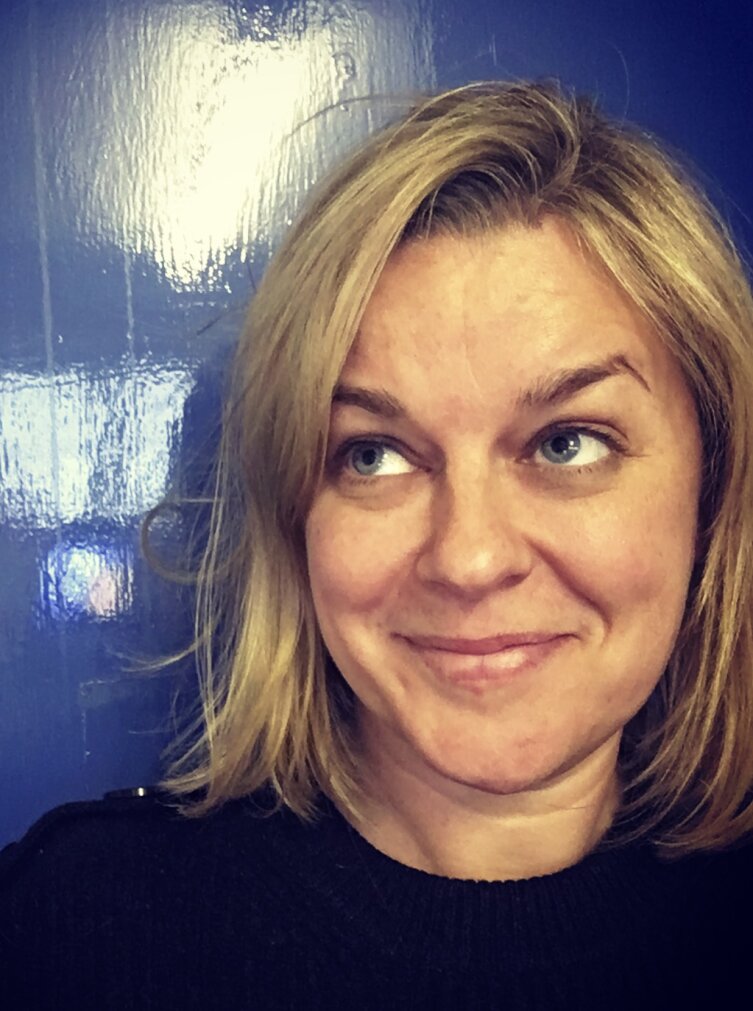 Describe your job to us, what’s your title & what do you do?

I’m a PR consultant for creative businesses. That might sound vague, but that’s because it can be multi-faceted and is open to interpretation, depending on need. In essence, I promote the work, people, beliefs and ideas of an agency/studio. I’m an independent consultant and I work across a host of clients, creating thought-leadership pieces, writing press releases, advising on ideas and scenarios, and strategically planning content against business targets and company manifestos. My job is to champion other people’s talents and successes.

How did you arrive at your current role?

It’s a random journey, so bear with me. It’s 1997, I’m 17 and annoying the life out of my mother. She complains about me to a family friend who happens to be an animation director and he, being kind and seeing how bored I am, suggests I come  up to London to work as his runner.

My first summer with Two Rivers Films was a brilliant experience and a huge learning curve. For the next six years, throughout school and university, I worked with them on and off, making Producer by the time I was 22. It was around that time – tired of being broke and never being able to go on holiday – (my BF and I were both freelance in production) that I applied for a job in The Guardian newspaper as a  Production Assistant and Researcher. I remember very clearly the interview I had with Paul Kemp-Robertson (who later founded the commercial agency Contagious). He asked me what my biggest fault was and I responded, “Gabby by name, Gabby by nature” – he chose me out of 356 applicants. That’s still one of my  biggest career achievements to date and also, one of the best career moves. I worked with Paul, as Head Researcher for a year, launching the first four Contagious Magazines, before being given editorship of The Reel where I relaunched and redesigned the publication – again, a huge compliment considering I was only 25-years-old.

It sounds like a walk in the park, but here’s where it all got a bit sticky. In 2007 I left editorial, moved to NYC and jumped the fence into PR. My first gig at StrawberryFrog was a baptism of fire and I still cringe at the mistakes I made during that time – not listening to my gut, not learning PowerPoint, never owning up to being lost. After six months I was fired, but was fortunate to get immediately picked up by JWT NYC as their North America PR Manager. Again, I didn’t own up to feeling lost, being out of my depth and I didn’t focus on what I was actually achieving – one of the best things I later learned from my boss there (Erin Johnson) was to shout about your successes, send out coverage reports, tweet the good news, print coverage, stick it under people’s noses. But meanwhile, after 12 months we all agreed it was time for me to go home and I flew back to the UK with my tail between my legs. For the first time ever, I felt like a failure.

It was 2009 and the world was in a financial crisis. There were no jobs, people were being let go left, right and centre, confidence in the economy was lost and budgets were being slashed by clients.

It was the best thing that ever happened to me. I signed on at Catford job centre, moved into my friends’ spare bedroom, washed dishes in a café, waitressed, sold old clothes on eBay and applied for jobs in other industries, namely the third sector. After six months of volunteering at The Lords Taverner’s, I took a temping job at Sue Ryder as their Internal Communications Manager. I was there for a year driving around the country with the CEO visiting all the palliative care centres, meeting different people, learning about neurological disabilities and end-of-life treatments, experiencing a new kind of passion and learning new skills.

It was around this time that Matt Cooper, owner of LBBonline, approached me, offering me editorship of the online magazine. I’d been recommended to him by an old Contagious work buddy, Richard Newman, who’d been a great champion of mine, encouraging me not to give up on advertising and reminding me that it was still my real passion. He was right, and it didn’t take much persuading for me to accept the role.

I returned to the industry in 2011 and since then I haven’t looked back. LBB gave me the opportunity to launch another platform, reach out to old contacts, gain back my confidence and remind myself that I had over a decade of really good, worthwhile experience under my belt. People who had supported us in the early days of Contagious rallied around and I found myself welcomed back into the community I thought I should hide from. The travel bug hadn’t left me and in 2012 I persuaded Matt to let me move to Hong Kong to set up LBB APAC.

I spent eighteen months in that amazing city before moving to Singapore to run marketing for MediaCom Asia-Pacific. In 2015 I came back to the UK – I was homesick, and, in my mid 30’s and as one of eight children, I wanted to be near my siblings and their children. I thought London would be the place for me, but after nine months in the UK capital, I realised I was miserable. I wasn’t sleeping, I hated my job, I was bored and I was suffering from anxiety, vomiting most days at work – and I had different aspirations to those around me: I didn’t care about the money, nor was I interested in the job title and I didn’t care for the politics I had to delicately tread around. I wasn’t learning and I wasn’t succeeding – so I left it all and moved to Margate. I got over the need to find another job instantly and took the summer off.

It’s been nearly four years since I packed up my belongings and headed down the M2 and, hand on heart, it’s the best thing I have ever done. I did return to advertising and PR, but I did it on my terms. No more corporates, no egos and no politics.  Having the ability to side-step the drama, stay clear of the socialising and hold firm on how I want to work and what I believe in – it’s been the making of me. This year is the most successful I’ve had since becoming independent. I’ve carefully selected my clients, working with people whose work and ethos I believe in, but also those I respect and like. It’s required a level of faith and also an element of ‘fuck-it-ness’, but it’s paid off; as Erik Spiekermann states in one of his very popular prints ‘Don’t work for assholes. Don’t work with assholes’.

What are your main tasks at the agency?

Promoting the work / writing press releases / editing / ghostwriting / cold-calling / cold-emailing / PowerPoint (thank God I now know how to use it) / advising clients / being strategic / forging great relationships between  clients and press / storytelling / seeing an opportunity and pouncing on it / honesty, bravery and transparency –  being able to say when something won’t work or isn’t interesting / knowing and understanding the industry / reading / listening / finding the silver lining / being a realist and an optimist.

What key skills are required to thrive in this role?

Quick-thinking: you have to be able to react, to see a path – be it a story or a response – but you have to be able to do so thoughtfully and confidently. Like all things in life, self-belief is key. If I don’t believe in myself, who’s going to believe in me? Also, being emotionally aware and trying to see where the other person is coming from. I might watch a piece of work and not see its merits, but it’s personal to the creative who came up with it. They’ve worked hard on that piece; it means something to them. So being diplomatic while  being realistic is a much-needed skill. Confidence is crucial.When I was employed full-time on staff, I worried all the time about losing my job and subsequently, I downplayed myself and didn’t speak up. Now I have several clients, I know that whatever happens I always have options, which means that particular worry has disappeared and instead I am the same assured person I am with friends and family. I’m the best version of myself.

What’s the most challenging aspect of the job? And the most rewarding?

Communication. I work remotely, so the first thing I have to do with a new client is to create a process whereby they can get information to me as quickly and as effectively as possible. As such, I devised an internal communications campaign called ‘Make Some Noise’ that I share with each of my clients. They use bespoke forms and shared calendars to keep me up-to-date with what’s going on and provide me with the content I need to get work done for them efficiently and accurately.

The most rewarding part of my role is getting coverage and sharing it with the people who made the work. I’m really lucky that my clients are not only a very talented lot, but are also humble and kind. When I send a coverage report at the end of a campaign they’re always so pleased and happy with the responses they’ve received. It’s fantastic to see them share coverage with their friends and colleagues across social media and know I’ve been a part of that.

How has PR evolved since you first began working in the field?

I used to have to use a fax machine and my mobile phone was the size of a clutch bag – so yes, a lot has happened since the days I was running UMAT tapes up and down the streets of Soho. The internet has transformed us; without it I couldn’t work from the beach as I do and it’s given us more publications to work with… but, in the same breath, it’s also taken many away.  Print is disappearing from our industry with  publications closing or downsizing. I hear about journalists leaving their jobs at least every 3 months; before they’d stay in roles for years – decades in fact.

What advice would you give to a newbie?

Listen. Don’t just shout your mouth off and react without thought; take time to take in what’s going on around you and what’s being said and then respond. I know there’s a need and want to answer a question instantly or to be the loudest in the room, but taking time to consider is fair and means you’ll have more confidence behind your decisions.

It’s easy to say ‘believe in yourself’ and as we all know, it can take years to find your feet, be happy in your own skin and know who you are and what you’re capable of. It’s not as easy an achievement as one would like, so I’d say ‘have faith’. Believe that one day you will feel all those things and you will know confidence. In the meantime, be honest and say when you’re struggling and at times faking it. The world has a way of righting itself, and it’s usually always for the better.