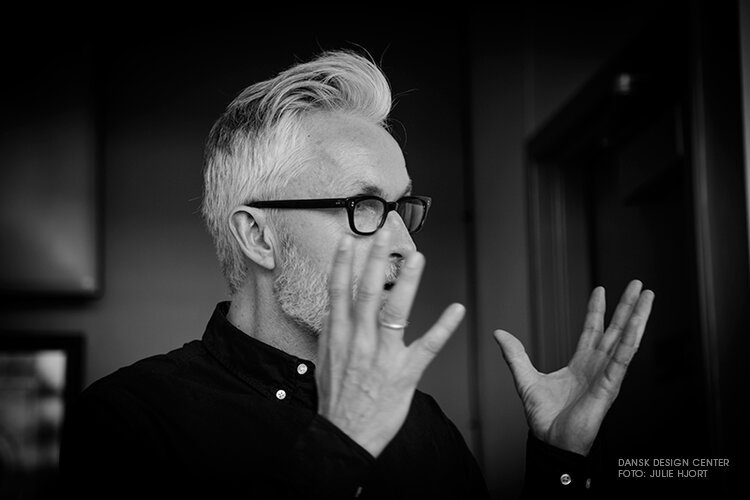 “When you’re a Dane,” says Ulrik Feldskov Juul, “Lego is quite something. I couldn’t let that opportunity pass me by.”

It’s fair to say that Lego would be quite something for anybody involved in the business of creativity. Ulrik recalls a sense of vertigo when he swapped a relatively large advertising agency – of 250 people – for an operation with 18,000 employees. But it wasn’t just the company’s size that made him feel like a rookie again.

“They literally spoke a different language. In my first meetings, there was so much new terminology I could hardly make a contribution.”

Not only that, but all the tricks he’d learned over 20 years in the ad business no longer applied. “You’re dealing with communications for kids. So you can forget irony, or outrageousness, or crossing the line. I was this grey-haired senior guy entering the company, and I had to learn everything from scratch.”

If you didn’t know Ulrik, you might guess from his appearance that he was a creative. That’s what happened to me, in any case. I met him by chance at a hotel in Berlin, where I was hosting the jury for the Epica Awards. As a champion people-watcher I’d already been intrigued by his distinctive white hair and black-framed spectacles – so I was delighted when we finally got chatting in the hotel bar. That conversation led, indirectly, to this interview.

Not that Ulrik set out on a creative path at first: “I actually went to business school, but I realised within the first year that it was definitely not for me. Too many numbers.”

After briefly dabbling in journalism, he went back to school to study an entirely new subject: Humanistic Informatics, about the relationship between people and technology. “It was so long ago that I remember seeing the Internet for the first time. Our professor took us into a small room where there was a brown computer with an orange cursor blinking on the screen. She tapped in a very, very long number and said, ‘Now you’re going to see something amazing.’ And nothing happened. She said, ‘I’m actually in a library in Boston University right now.’ We said: ‘Great. Can we go for lunch now?’”

After university Ulrik got a job in marketing – but that wasn’t the right fit either. “Budgets and more numbers. But in that role I also worked with an agency. Not only did I find what they were doing far more interesting  than my own job, but I also came up with better ideas than they did.”

This insight led him to enter the agency world as a copywriter, working notably at Uncle Grey and ZupaRecommended, where he was partner and creative director. He joined Lego in June 2013.

“You know, communications towards kids is among the most regulated you can do, for very good reasons. Although we need to be inspiring, we also need to respect the fact that we are dealing with children, so we mustn’t try to trick them into buying stuff.”

For the past five years he’s been working on global campaigns, liaising with the creative teams for each franchise, part of an in-house agency of more than 400 people. Concepts for the campaigns are developed in tandem with the products. “It goes from presenting mood boards to kids to see if they get the story around the new product, all the way through to print, TV commercials, digital, events, content for Netflix…you name it.”

When I was a kid, Lego was just a big box of bricks. But the brand now has many different strands, from Duplo for the youngest right up to Lego Technic for the most sophisticated. (The basic bricks are still out there, by the way: they’re called Lego Classic.)

Engendering creativity is the idea that underpins it all. Lego’s mission is to “develop the builders of tomorrow” – and it wants to reach 300 million kids by 2032. The word “Lego” actually derives from a Danish phrase meaning “play well”.

“Lego strongly believes that the bricks can help fuel kids’ creative spirit and their ability to learn via play. So we start with bringing kids into the brand via Duplo, where the target is actually parents. Because these days, parents understand the value of togetherness through play.”

As a toy, a pile of bricks is pretty basic compared to all the screen-based games available to children now. “But the true beauty of Lego bricks is that they spark kids’ imaginations,” Ulrik says. One of his favourite ads for the brand animates a story that kids are making up as they build. “It was totally unscripted, but they pushed creativity and storytelling to places I never could in all my years as a copywriter.”

I mention one of my own favourite Lego campaigns, based on the concept, “Whatever it is, it’s beautiful.” Which just about sums up the magic of creativity.

“Some studies show that human creativity peaks at the age of three,” says Ulrik. “After that, we hit the school system and all the conventions that say things must be done in a certain way.”

Lego is flying the flag for lifelong creativity. Indeed, plenty of adults still love the bricks. You can see their animations all over YouTube. This also explains the runaway success of the brand’s movies and TV shows, from The Lego Movie to Ninjago. Their thread of quirky humour makes them entirely watchable for parents.

Ulrik points out that Lego is in constant touch with its fan base: enthusiasts can even submit ideas for new kits, and receive a fee if they’re put in to production. There wouldn’t have been a Doctor Who kit without a suggestion from a fan. Ninjago, a Lego-developed franchise that started out as something of an experiment, still exists today because the fans embraced it so warmly.

Ulrik is currently moving into a new role as creative director of Lego’s EMEA agency, dealing with around 150 markets. His team will explore the way Lego is perceived in different overseas markets, adapting global campaigns to local needs. “In Western Europe and the US people are pretty familiar with the brand and its approach, but in China, Eastern Europe and certain emerging markets, we need to tell a slightly different story to bring people on board and make them understand the values behind the bricks.”

Five years after joining the company, he says he’s still delighted to be working for a “purpose brand” that is admired and desired by consumers.

“You know, children wish for us for Christmas. That’s quite a responsibility.”

For Ali Rez, the Quest Continues